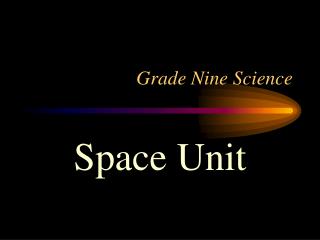 Grade Nine Science - . properties of matter. matter. what is matter? matter is anything that has mass and takes up space.

Grade Nine Chastity Education - . outcome : 9.12 a students will examine chastity as a responsible choice in determining

Science Log Nine Debrief - . clouds and feeding roles. cirrus clouds. *cirrus clouds are made of ice . * they are thin,

Grade 7 Science - . unit 2: heat chapter 6: “heat is transferred from one place to another by three different

Fourth Grade Science - Directions:. find a partner.one partner turns his back to the screen.the other partner will look

Grade 7 Science - . unit 1: interactions within ecosystems. what is an ecosystem?. complete the activity on page 5: what

Grade 8 Science - . kyle rosbrook. outcome ws8.2 examine how wind, water, and ice have shaped and continue to shape the