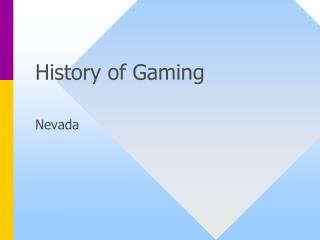 History of Gaming. Nevada. Evidence of Gaming Goes Back to 300 B.C. American Indians (Washo) in southern Nevada gambled on: Foot races and stick and rope games; Stakes were baskets, eagle feathers, jewelry, buckskins, or as simple as a hit on the head or hand. Before Statehood. History of Gaming - . vinay reddy. the used a top-loading cartridge connected to televisions through a coaxial cable. w

History of gaming - . the first games . physicist willy higginbotham invents the first &quot;video game“ in 1958 at

The history of video gaming - . by raul seijo. back to the past . the consoles back in the days were small but bulgy .

The history of video gaming - . created by – dayton spink. introduction. welcome to my project. today i will be

Online Gaming and it’s History - . online gaming is playing videogames with opponents through the use of networks. it

Best Games in The History of Indian Gaming : Satta Matka - Satta matka : sattamatkai is an excellent resource that aims