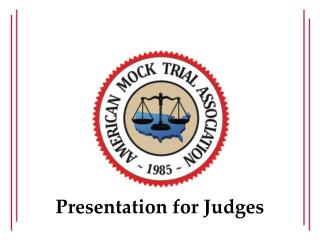 Appointment of Judges - . g. l. davies. introduction. my proposal two-years ago: establishment of a body to appoint or

The Judges of Israel (Introduction) - . the godly generation who lived at the time of joshua dies. (see judges

Christ in the Judges - . study 2 – “ehud and the atoning work of christ”. christ in the judges. the periods covered

The Judicial Branch - . the judicial branch interprets the law. the judges determine whether or not laws have been broken

Joshua and Judges - . corresponding to chapter 9 of textbook. what is crossing the river jordan a type of? baptism why?.

Conquest and Judges - . joshua 11 (defeat of the northern canaanite