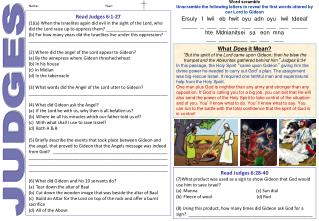 Judges 6-8 - Gideon's victory. judges 6-8. education the process by which society transmits its knowledge, skills and

Study In Judges - . chapter 1v1-21. conquest and failure. we begin with an introductory comment made by graham

The Era of the Judges A Few Good Men and Women - . “from conquest to compromise to conquered”. gideon. from conquest