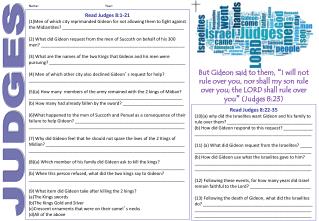 Joshua and Judges - . the bible course, unit 5. document#: tx001078. joshua. joshua was the successor to moses who led

RUTH: Complimentary book to Judges - . high drama and divine intervention. title of the book. both the hebrew, the greek

The Judges of Israel (Introduction) - . the godly generation who lived at the time of joshua dies. (see judges

Old Testament Study of Judges - . compiled from preaching at dbc pastor kevin maki 2006. where does judges fit in

Judges - . israel after moses. joshua leader of the israelites find the promised land occupied – it was great land!

Christ in the Judges - . study 2 – “ehud and the atoning work of christ”. christ in the judges. the periods covered

Joshua and Judges - . the bible course. document#: tx001078. joshua. joshua was the successor to moses who led the

Christ in the Judges - . study 6 – “ jephthah - the return of israel’s rejected deliverer”. christ in the judges.

Judges 17 - Now a man named micah from the hill country of ephraim 2 said to his mother, “the eleven hundred shekels

Study In Judges - . chapter 2v20-3v31. the judges take the stage. no fewer than five reasons are given in the book of

Joshua and Judges - . corresponding to chapter 9 of textbook. what is crossing the river jordan a type of? baptism why?.

Conquest and Judges - . joshua 11 (defeat of the northern canaanite