Invasion of the Land by Tetrapods - PowerPoint PPT Presentation 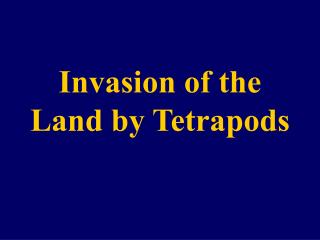 Invasion of the Land by Tetrapods Invasion of the Land by Tetrapods

Marine Mammals, Birds and Reptiles - . to the land and back. 350 mya - tetrapods evolve from fish need: lungs forelimbs

Vertebrates - . the origin of tetrapods. the first vertebrates on land were amphibians in the devonian may have arose

Harvesting the Sea - Commercial fishing and its effects on Osteichthyean and - Chondrichthyean fishes. between 1950 and

THE DEVONIAN - . life in the devonian sponges with glass skeleton. hydnoceras left hindia above. the devonian. life in

Early Tetrapods - . origin of the amphibia and reptiles. very much like crossopterygians, plus legs no other changes!!!.

Vertebrate Evolution: Animals with a vertebral column made of bone or cartilage - . vertebrates are part of a larger

Vertebrates - . chapter 34. the chordates. distinguished by four principle features some time in their lives: nerve cord

Subphylum Vertebrata - . the vertebrates are a large and diverse group including the fishes and tetrapods (animals with 4