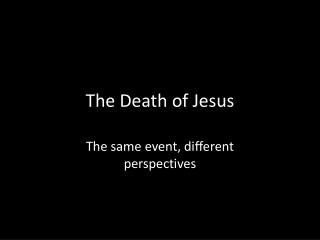 The Death of Jesus

The Death of Jesus

Last Will and Testament Of Jesus Christ - . “for where a testament is, there must also of necessity be the death of the

The Death of Jesus - . intergenerational seminary session #8. what describes jesus on the cross: abandoned, trusting, or

Revision for Unit 3 Jesus’ suffering, death, resurrection - . entry into jerusalem – was it a challenge? the

The Meaning of Jesus’ Death - What meaning did the death of stephen lawrence have on uk society?. how can the death of

Jesus to 4 Gospels - . (source: from one jesus to four gospels by herman hendrickx ). why did it takes so long?. second

The Physical Death of Our Lord and Savior Jesus Christ - . dr. mark i. kaldas. p urpose. examine the physical pains that

Lesson 9: The Resurrection of Jesus Christ - . i. the resurrection: at the heart of the gospel. h orrible death e mpty

THE RESURRECTION OF JESUS CHRIST - Some doubt the resurrection. thomas"unless i see in his hands the print of the