The Death and Burial of Jesus - PowerPoint PPT Presentation 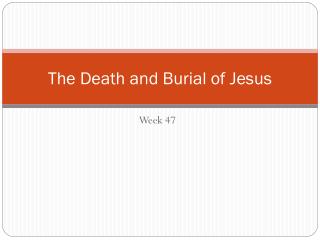 The Death and Burial of Jesus

The Death and Burial of Jesus. Week 47. Weekend Information. Friday: Christ Tomb Tour Leave from Burns at 4:15 Begins @ Woodlawn on Thompson Lane at 5:15 Eat afterwards. Shoney’s or Rafferty’s? If interest – come back and watch The Gospel of John Saturday: Singing at Casa de Hiatt

The Death and Burial of Jesus

The Birth, Death and Resurrection of Jesus Christ: - . the evidence. the birth of jesus in bethlehem of judea. foretold

The Death of Jesus - . intergenerational seminary session #8. what describes jesus on the cross: abandoned, trusting, or

Suffer With Me - . session 8: friday and saturday the lord’s crucifixion, death, and burial. events of the day. jesus

Spartan Religion, Death and Burial - . gods and godesses. artemis orthia - is the goddess of the wilderness, the hunt and

Death, Burial and Resurrection - . “for i delivered unto you first of all that which i also received, how that christ

Death and Burial - Rolynda, n ishelle, jared, and a lyssa. death and burial. celtic/druid anciently. there are 1,300

Death - 1co 15:3 for i delivered unto you first of all that which i also received, how that christ died for our sins

Catholic Practices Illness, Death and Burial Sacrament for the Anointing of the Sick The Order of of Christian Funeral

THE RESURRECTION OF CHRIST : - . hoax or reality?. matthew 28:1-8. the resurrection of christ was the central theme of

THE RESURRECTION OF JESUS CHRIST - Some doubt the resurrection. thomas"unless i see in his hands the print of the

The Death of Jesus - . lesson 4 how is jesus’ death a pattern for our lives?. how do we receive forgiveness of our sins

The Resurrection of Jesus - . its power, hope, and victory!. “but now christ is risen from the dead and became the