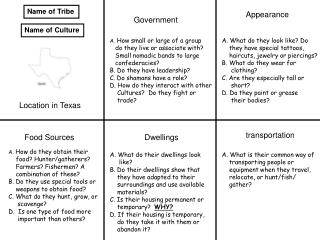 Name of Tribe. Appearance. Government. Name of Culture. A. How small or large of a group do they live or associate with? Small nomadic bands to large confederacies? B. Do they have leadership? C. Do shamans have a role? D. How do they interact with other

Zuni Tribe - . by: olivia samuelson. meet the zuni’s. keshhi ! that is hello. in this project all your questions about

Title Name of Tribe - . by creators of presentation. location. where did the tribe live? what geographic features were Comanche Tribe - . by: connor , jacob, natalie , cameron and justice. how they got their food. they got food by hunting