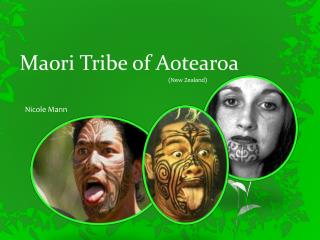 Maori Tribe of Aotearoa. (New Zealand). Nicole Mann. Material vs. Non-Material. The Maori are a non-material culture Achievements and success are not measured by material things, but by “ mana ” which is honor Americans, however, are quite materialistic. Te Reo Maori. Aotearoa - . the birth of a country. gondwana this reconstruction of the gondwana supercontinent about 200 million years

Name of Tribe - . appearance. government. name of culture. a. how small or large of a group do they live or associate

Maori Spirituality - . before the christian church reached the shores of aotearoa. development. maori spirituality is an

Maori NZ - . by : james- 6a. cultures in the past . they rule by tribal chief. maori called themselves “ people of the

Outcomes for Maori through Maori designed interventions - . linda tuhiwai smith. two fundamental questions. how do we

The Maori - . arrival. several waves of migration came from eastern polynesia to new zealand between ad 800 and 1300.

Maori art - New-zealand. maori art. the origins. historians are divided: for some, they came from asia (from island to