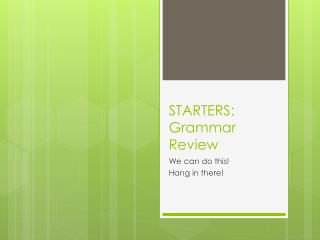 STARTERS: Grammar Review. We can do this! Hang in there!. STARTER: Copy in your own notebook, not your class notebook. Noun: a word that stands for a person, place, thing or idea. Categories: Collective nouns name a group of individual people or things.

Grammar and Punctuation - . bellwork: copy down in your spiral notebook. notes in red independent practices in blue or

Unit One Grammar Practice - By kristi waltke a sentence is a complete thought. here are some sentences. i asked daddy

Sentence Writing - . week 3. 1. topic sentence writing. it is the most important sentence of a paragraph; it tells the

Granada, September 7th 2006 - How to create a powerful learning environment based on authentic video materials , pitfalls