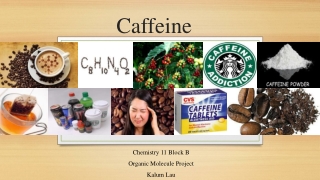 Caffeine. Chemistry 11 Block B Organic Molecule Project Kalum Lau. History of Caffeine. B efore recorded history, caffeine has been used since the Stone Age, humans would chew on certain seeds, barks or leaves knowing it will give them energy.