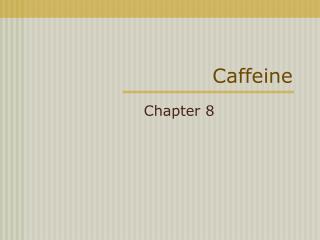 Caffeine. Chapter 8. Caffeine. Most used drug in the world An alkaloid belonging to a class of compounds called METHYLXANTHINES Caffeine Theophylline Theobromine. History of Caffeine. Huge history of use Tea dates back to 2737 B.C. in Chinese legend