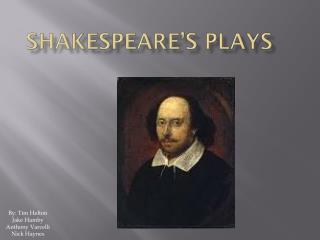 What kind of plays? - . during shakespeare’s career, fashions and tastes in drama changed. he wrote mostly comedies and

William Shakespeare and His Theater - . actor ~ businessman ~ writer ~ legend. what do you already know about

The Greek Plays Themselves - . a quick overview of the most important dramas. agamemnon by aeschylus. first a little

A Midsummer Night’s Dream - . what do you know about…. william shakespeare. his life and times april 23,1564 april