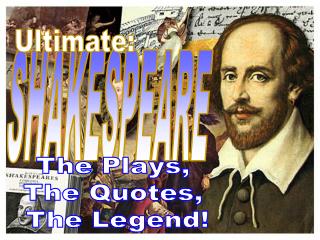 Ultimate:. SHAKESPEARE. The Plays, The Quotes, The Legend!. To be, or not to be, that is the question. Romeo and Juliet. Othello. Midsummer Night's Dream. Hamlet. Julius Ceasar. Macbeth. This above all, to thine own self be true. Influence and Importance. Shakespeare - . ms. jennifer chiu. av materials for reference (which you can borrow from the multi-media center). in

Shakespeare - . monologues , soliloquies, and asides. what is a monologue?. a monologue is an extended speech (or ,

Shakespeare! - . the bard (aka a person who composed and recited poems). timeline. 1597. romeo and juliet is written.

Shakespeare - . done by: maryam al- hashmi. introduction. - who is

Shakespeare - . in this unit we will…. learn about life during shakespeare’s time do a shakespeare project – become

Shakespeare - . the life &amp; times of the legendary playwright. william shakespeare. -baptized on april 26, 1564 in

Shakespeare - . life in elizabethan times. filling the time. there is nothing as dangerous as a bored nobleman. these are