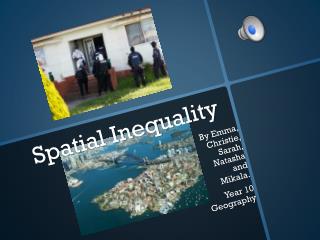 Spatial Inequality. By Emma, Christie, Sarah, Natasha and Mikala. Year 10 Geography. Explain the spatial and ecological dimensions of the issue. Spatial Dimension: Where it is and why it is there. Ecological Dimension: The interaction of humans and their environment . Spatial Disorientation - . why you shouldn’t fly by the seat of your pants. medical facts for pilots; publication:

Life on the margins: the inequality of food and nutrition security MALNUTRITION - . powerpoint presentation by médecins

Lecture #2: The Welfare State - . theories and implications for inequality. goals of the lecture. introduction -