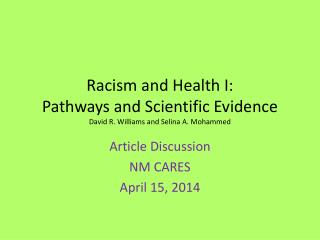 Racism and Health I: Pathways and Scientific Evidence David R. Williams and Selina A. Mohammed

Racism and Health I: Pathways and Scientific Evidence David R. Williams and Selina A. Mohammed

What Is Scientific Evidence?