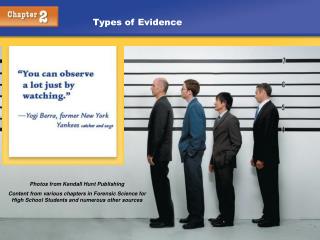 Types of Evidence. Photos from Kendall Hunt Publishing Content from various chapters in Forensic Science for High School Students and numerous other sources. Testimonial evidence is a statement made under oath; also known as direct evidence or prima facie evidence.