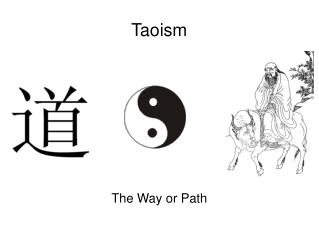 Taoism. The Way or Path. Taoism or the School of Tao refers to a set of philosophical teachings and religious practices rooted in a specific metaphysical understanding of the Chinese character Tao.

Taoism - . “in dwelling, live close to the ground. in thinking, keep to the simple. in conflict, be fair and generous.