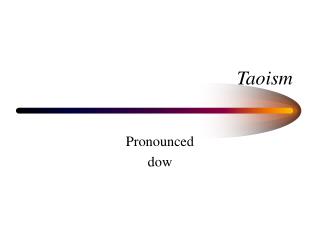 TAOISM - . taoism currently has about 20 million followers, and is primarily centered in china. but yin/yang far older in

Taoism - . by: brandy student. number of adherents. “currently has about 20 million followers, and is primarily

Taoism - . tao. tao can be roughly stated to be the flow of the universe, or the force behind the natural order. tao is

Taoism - . the great tao flows everywhere. it may go left or right all things depend on it for life. and it does not

Taoism - . the human being follows [the laws of] the earth, the earth follows the heavens, the heavens follow god, and