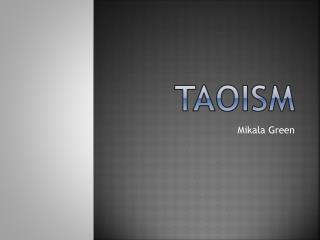 Taoism. Mikala Green. Facts. Taoism, also known as Daoism, is an indigenous Chinese religion. Created in the 3 rd or 4 th century B.C.E. Created using Laozi’s biography. Laozi was recorded to live between 160 and 200 years due to his self- cultivation and longevity practices.

Taoism - . “in dwelling, live close to the ground. in thinking, keep to the simple. in conflict, be fair and generous.

Taoism - . the way or path. taoism or the school of tao refers to a set of philosophical teachings and religious