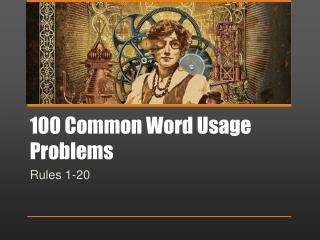 Who vs. Whom - . linsey page. side one: standard usage. english classes, dol, drills, etc blogs facebook groups i judge

Grammar and usage - . discussion. what are they wearing? can you describe the team using attributives?. the red team 2.

Rational Number - Word Problems - . august 21, 2009. example 1. the highest recorded temperature in the u.s. was in death

How to Know When to Use GCF or LCM to Solve a Word Problem - . greatest common least. smallest time least buy or get

Commas &amp; Comma Usage Problems - . by: gloie alexander. types of commas. listing commas are used in a list where

High Frequency Words 251-300 - . type each word at least once before the next word appears. keep your eyes on the

MPC Job Descriptions Using the 10 hundred most common English words - . “i work at the computer all day making the