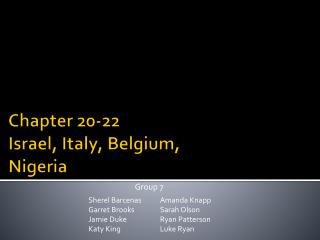 Chapter 20 + 22 Test Review - . have a cuticle and stomata – help with retaining moisture and the movement of o2 and

Chapter 3 Italy - . david hine. italy. the peculiarities of italian democracy the end of the ‘first’ republic the

October 22-29 2006, Bari, ITALY - Strengthening of services to farms and institutional support for the development of