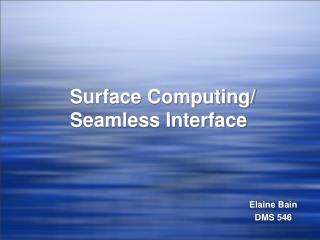 At A Glance The API provides a common interface to the GMSEC software information bus. - Gmsec application programming

Portal Interface We present an interactive workflow scenario. - Below: our portal architecture is a standard three tier

ABOUT COMPUTER - . computer. it is an electronic device which accepts data supplied by the user. inputs, stores and

Where is the Interface between Weather and Climate? - . klaus wolter noaa-esrl &amp; university of colorado at