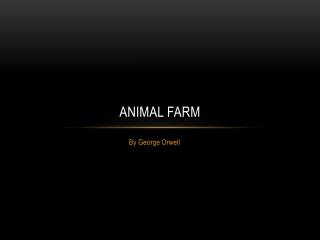 ANIMAL FARM . By George Orwell. Allegory. The representation of abstract ideas or principles by characters, figures, or events in narratives, dramatic, or pictorial form. A symbolic representation

Animal Science II-Small Animal - . birds-unit d3. parrot family. contains some of the smartest birds. many species can be

Animal Farm, by George Orwell - . adapted from version by darren leu. what is the tone of animal farm ? how do you know?.

Domestication and Importance of Livestock - . animal science 1 unit 1. objectives. discuss briefly the history of the