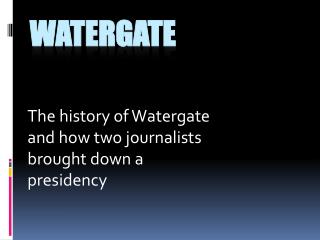 The history of Watergate and how two journalists brought down a presidency. Watergate. History. In June of 1972, five men were arrested in a burglary at the Watergate Apartments in Washington, D.C. June 17, 1972.

The Watergate Scandal - . the downfall of a president. the watergate complex. the president’s men. when nixon took

Nixon and Watergate - . the election of 1968. nixon campaigned as a champion of the &quot; silent majority

Watergate: Nixon’s Downfall - . how does the watergate cover up lead to nixon’s downfall?. all the president’s men

Watergate: Nixon’s Downfall - . how does the watergate cover up lead to nixon’s downfall?. all the president’s men

A Watergate Diary By Elizabeth Drew - . may 1973. the watergate scandal. the scandal began in 1972, when richard

The Watergate Scandal - . l/o – to identify the reasons for watergate and to explain what happened. nixon meets chinese

Chapter 30 – A Search for Order - . section notes. video. a search for order. the nixon years from watergate to ford