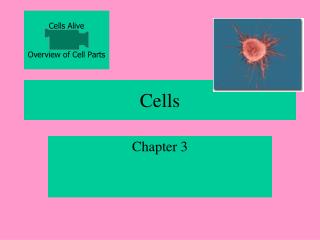 Cells Alive Overview of Cell Parts. Cells. Chapter 3. Cyt- cell Endo- in Hyper- above Hypo- below Inter- between. Iso- equal Mit- thread Phag- eat Pino- drink -som - body. Prefixes/Suffixes. Now we are ready to review the cell. What is in the cell?.

STRAND 1: Molecules and Cells Biology Standard 2 - . students shall demonstrate an understanding of the structure and

AIM: How did Scientists discover cells? - Do now: list at least 3 cells in your body and explain their function. hw:

Cells - . cell theory. cells are the fundamental (smallest) units of life. all organisms are composed of cells. all

CELLS The Building Blocks of Life - . systems. tissues. organic molecules. organs. cells. cells are made up of organic

Chapter 26 - . the synthesis and degradation of nucleotides biochemistry by reginald garrett and charles grisham.