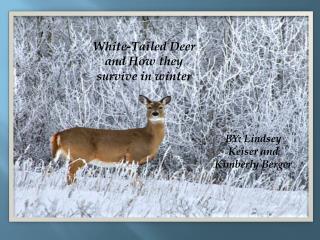 White-Tailed Deer and How they survive in winter White-Tailed Deer and How they survive in winter

Research and the Common Core: Can the Romance Survive - . p. david pearson uc berkeley. goals for today. review what is

(If we want to see the rainbow, we have to survive the storm) - In this life we can’t all do great things, but we can

我的心如鹿切慕溪水 As the deer pants for the water 我灵深深切慕祢 so my soul longs after You.

The Hunger Games Introduction - . learning target: i can determine what it takes to survive in a perilous situation. what

Chapter 13 The Bizarre Stellar Graveyard - . 13.1 white dwarfs. our goals for learning • what is a white dwarf? •

Can we Predict the Impact of Observations on 3 to 6 day Winter Weather Forecasts? - Masters thesis defense may 10, 2007