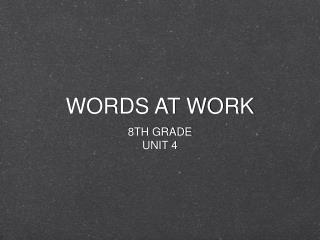 WORDS AT WORK. 8TH GRADE UNIT 4. auto- self. autobiography- an account of a person's life written by that person autocorrelation- correlation between the elements of a series and others from the same series separated from them by a given interval. autocrat-a ruler who has absolute power.

First Grade Sight Words - . first grade curriculum month by month phonics. kindergarten review. a. am. and. at. can. for. Emotive Language - . choice of words packed with emotion can influence an audience for or against your ideas, to be with

Compound Words - . two words joined together to make one word. after. noon. air . plane. air. port. any. body. any. one.