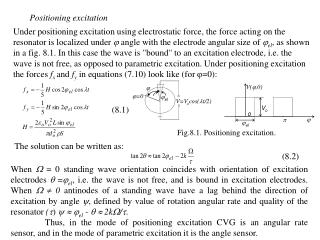 Muscle excitation - . the excitation of muscles depend on the arrival of a stimulus to the muscle cell membrane to

2.4 Base Excitation - . important class of vibration analysis preventing excitations from passing from a vibrating base

Positioning - What is matador? matador is the only pre-emerge annual grass and broadleaf herbicide which offers 3 modes

Positioning - . positioning (the act of designing the company’s offering and image to occupy a distinctive place in