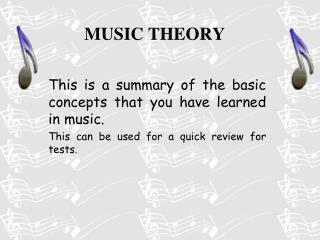 MUSIC THEORY. This is a summary of the basic concepts that you have learned in music. This can be used for a quick review for tests. Music Theory Contents. Pitch Musical Alphabet Music Staff Whole and Half Steps Accidentals Treble Clef Bass Clef Time value Scale. What Is Pitch?. Music Theory - . melody. melody. the first that appears at the beginning of every staff is a clef symbol. the clef tells

Music Theory 101 - . snack theatre 2013. the beginning. a staff is made up of five horizontal lines and four spaces a

Theory of Music - . the theory of music has been developed to systematize the practice of music. components of music.

Music Learning Theory - . by nick palmisano. synopsis. based on the research and field testing of edwin e. gordon

AP Music Theory - . chapter 2 – part 3. tonality. organized system of tones in which one tone (the tonic) becomes the