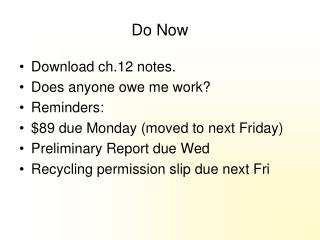 Do Now. Download ch.12 notes. Does anyone owe me work? Reminders: $89 due Monday (moved to next Friday) Preliminary Report due Wed Recycling permission slip due next Fri. Energy. Energy Star Program 1992, US Dept of E 2005 Energy Policy Act Improvements in energy conservation