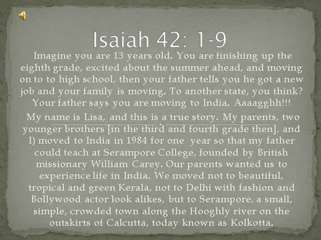 A Peek Inside the Devil’s Playbook - . a lenten bible study based on the screwtape letters by c. s. lewis. a peek

LUTHER’S CATECHISMS - . “catechism” – an instruction in the essentials of the faith enchiridion. d: 41 &amp;

Where are we going… where have we been? - . smyr na. commission character commendation condemnation correction call

A Peek Inside the Devil’s Playbook - . a lenten bible study based on the screwtape letters by c. s. lewis. a peek

Don’t Forget: Devotional/Fellowship Menu: Thanksgiving - . i. my differences from jesus ii. my similarities to man. my

Fasting in Islam; - . and comparison with other communities bashaar husain bsss-ib 1317156. what is fasting?. one of the

G iving I - Expectations. u p. g iving i. a lenten sermon series at verona umc - what are you giving up for lent?.

Welcome to Mayflower - . open to god open to all. lenten liturgy. lent is a journey with jesus toward jerusalem, toward

Lenten Latin Names - . what does it have to do with me?. lent. lent = lencten “springtime” sundays in lent, not of

A Lenten Reflection From Gospel to life and life to Gospel - From prayer to action by Andrew Conradi, ofs Ordo Franci

PC(USA) Environmental Ministries pcusa.org/environment - . resources. and the leaves of the tree are for the healing of

Ash Wednesday - . god welcomes us come back to the lord your god; he is kind and full of mercy. he is patient and keeps

The Crucified &amp; Risen Christ - . a lenten journey. the passion according to mark. session 1 of lenten series.