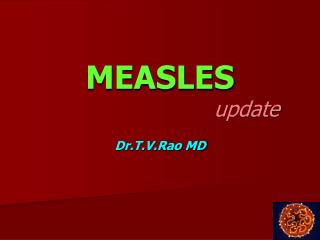 Measles is an important communicable disease prevalent even in developed countries , effective vaccination continues to be optimal goal in achieving the desired goal What are the symptoms of measles and how to prevent it? - Measles is a viral disease that can spread rapidly. this is a measles virus - The measles virus (mv or mev) is a member of the genus morbillivirus, which belongs to the family

Measles: Causes, Symptoms, Complications and Treatment - Measles is a viral infection that affects the respiratory system

Fighting measles - The global effort to combat the

Measles and Measles Vaccine - . epidemiology and prevention of vaccine-preventable diseases national center for

Paramyxovirus : The Measles And Mumps - . by katie duvall and megan cousins. general characteristics. paramyxovirus is a

Measles - . kei kurosu. in much of the world, measles is still a deadly disease.

Measles - . bio 062 presentation austin cromer. the discovery of measles can be found in the works of a persian