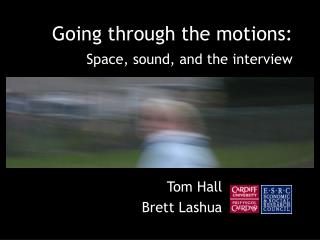 How Is Sound Produced? - . tweeters use corona discharge to produce sound corona is produced by dielectric breakdown of

Waves and Sound - . the world is full of waves. some waves like those in water are obvious. others, like sound and light

CONDUCTING AN INVESTIGATIVE INTERVIEW - . purpose of interview. to obtain a truthful account from the child in a manner

Common Interview Questions - Job interview is among the most important phase in the job seeking process. it is through

Interview tips - . by emmanouil n.choustoulakis. the president of a research firm, says the most important thing you

Earth Motions and the Heavens - . rotation revolution precession. what are the basic earth motions?. rotation.

The Successful Job Interview - . helpful tips to help prepare for the interview, from apparel to responding to difficult