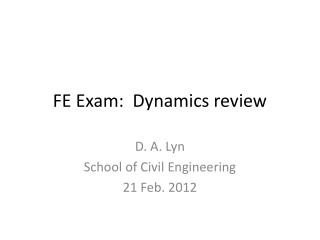 A Review of Canadian Publications and Impact in the Natural Sciences and Engineering, 1996 to 2005 - . ost

Unit 9 Exam Review - . conservation biology – conservation may be defined as the management and sustainable use of the

The FE Exam - . everything you need to know. by: asu chi epsilon officers . what is the fe exam?. this semester the fe

Prepare for and Pass The Fundamentals of Engineering Exam - . david a. rockstraw, ph. d., p. e. overview. what to expect