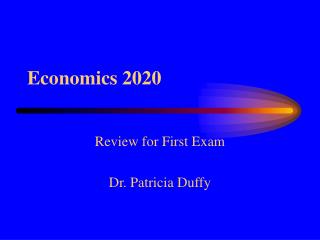 Economics 2020. Review for First Exam Dr. Patricia Duffy. ECON 2020. Information about EXAM 1 The Exam will Not be Scaled!. Test Format. Multiple Choice Questions worth 3 pts. each. (I haven't finalized the exam yet. There will be 20 to 25 of these.) Fill-in-the-blank questions Economics 324: Labor Economics - . any questions?. labor demand. a firm’s demand for labor is a derived demand .

ECONOMICS - . what does it mean to me?. part vi: the role of government in microeconomics/ externalities. economic

Economics - . the clear choice. why economics? why uwm?. economics is an interesting and challenging subject at uwm you

Economics - . warm up: what are the five different types of unemployment?. measuring our economy. to see economic growth

Economics - . text extracted from the world food problem leathers and foster, 2004. supply and demand. supply curve if a

Economics - . ch 1. need vs. want goods services. scarcity- a limit in all products or services. needs and wants are all

Economics - . by: apollo . goods are what you buy to get stuff you need or want . goods. services are what people provide