Nothing But the Truth By Avi - PowerPoint PPT Presentation 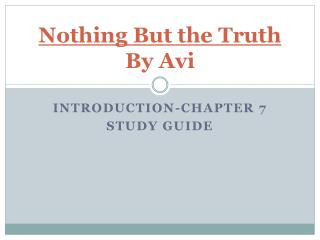 Nothing But the Truth By Avi Nothing But the Truth By Avi. Introduction-Chapter 7 Study Guide. 1. What two questions open up this novel?. Do you swear to tell the truth, the whole truth, and nothing but the truth? Does anyone ever say no?. 2 . What is the name of Philip’s school? What grade is he in?.

Nothing But the Truth By Avi

Responding To The Challenges Of The DaVinci Code Rev. Dave Geisler Meekness and Truth - Http://www.davincicode.org.sg.

The Other Side of Truth by Beverley Naidoo - . presentation prepared by dr.magda hasabelnaby aou cairo branch. beverley

There is nothing so powerful as truth and often nothing so strange. Daniel Webster - . all time management begins with

The Path of Truth to Life Bible Translation Project - . the names and pronunciation of names in the

Once Upon A Time… and Happily Ever Afters : A Review of the Fundamentals of Genetics - . pinocchio: truths and tales.

A Single Version of the Truth: Using Business Intelligence to Inform Policy and Decision-Making - . presented to tair

The Truth About Easter - . hotep-my-brother inc. bro. wamwara. outline. history and origin of the word easter how the

AUTOMOBILES TAKING THE CUSTOMER ALONG, FOR A RIDE - Market truth societial truth automobiles - taking the customer