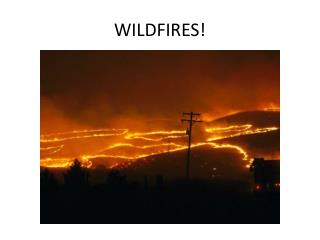 WILDFIRES!. Wildfires! . Wildfires are uncontrolled blazes fueled by weather, wind, and dry underbrush They can burn acres of land—and consume everything in their paths—in mere minutes! Climate Change and Wildfires - . a little about climate change. there is not just one reason for the past 200 years of

WILDFIRES - . by collin vansant. how there started. most wildfires are started by the heat from the sun reflecting dry ,

Types and Categories of Wildfires - What are the causes and effects of wildfires? ag-fs-5. the student will be able to

WILDFIRES, DEFORESTATION, LAND USE CHANGE - . topics for today. biomass burning: a source of gases and particles how are