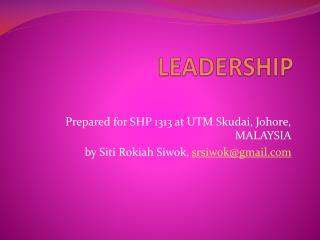 LEADERSHIP. Prepared for SHP 1313 at UTM Skudai , Johore , MALAYSIA by Siti Rokiah Siwok , srsiwok@gmail.com. First , a basic question:. Is study of leadership important?. Leadership. What is leadership? Who are leaders? What do they do? What are their characteristics?