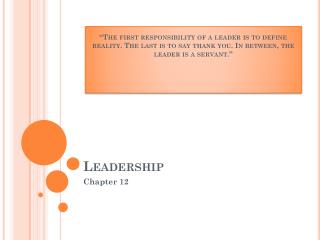 “The first responsibility of a leader is to define reality. The last is to say thank you. In between, the leader is a servant.” . Leadership. Chapter 12. What is Leadership? (pg. 284). Behavior/communication that influences, directs, or controls a group