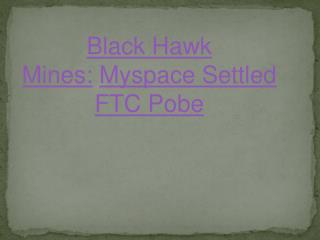 The one-time leading social networking site Myspace has reached a settlement with the Federal Trade Commission over the privacy probe recently conducted./n /nMyspace was charged with representing its privacy policies to its users, which brings to mind similar deals agreed upon by Google and Facebook on respective FTC investigations involving them. Hawk Hook - . competition! individual: you have 10 minutes to answer these question, no help, or calendars allowed. i

BIRDS OF WHATCOM COUNTY - . bald eagle. adults have black bodies and white heads juveniles do not have the white heads

BLACK HOLES: The Other Side of Infinity - . presented by: sarah silva (ssu nasa) and phil plait. the show content. the