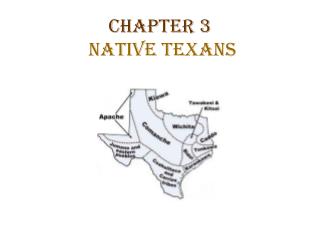 Chapter 3 Native Texans. Section 1 Ancient Texans. First peoples migrated from Siberia along the land bridge crossing the Bering Strait How do we know who the people are or how they got here? Archaeologists - study evidence of past civilizations Artifacts - bones, baskets, shells, tools.

The Great West: Native Americans - . closing the frontier?. in 1890 census, government said that the frontier (place of

Chapter 3 THE REGIONS OF TEXAS - . section 1: a regional crossroads section 2: the gulf coastal plain section 3: the

Chapter 3: Native Texans - . texas history. the ancient texans. as early as 35,000 years ago, people migrated to the

Woodland Tribes Move to the Plains - . chapter 3, section 2. the crow. the crow people arrived in montana after decades

Native Texans - . early americans. first people to come to north america may have migrated from asia about 37,000 years