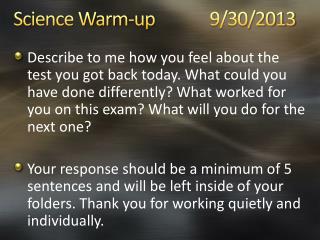 Science Warm-up 9/30/2013. Describe to me how you feel about the test you got back today. What could you have done differently? What worked for you on this exam? What will you do for the next one?

Short Answer Responses - . sentence one: start with a thesis that clearly answers the prompt sentence two: back up your

OBJECTIVE : Through collaboration and planning, you will rebuild an ancient city of Mesopotamia - Building. mesopotamia.

The 4 th Quarter will be based on three key objectives and activities - . the magazine project will be the last stage in

HOW TO SOLVE THE NAVIER-STOKES EQUATION - . based on: on pressure boundary conditions for the incompressible

Web Science 2013 - . did we learn anything?. important announcements. at end of these slides info on submitting final

September 12, 2013 - . journal write the following: 1 sentence that properly uses a semicolon 1 sentence with an ellipsis

Solve absolute Value Inequalities - . isolate the absolute value on one side of the equation. write the problem as a

Welcome back, future leaders! For today’s warm-up please do the following: - Grab your student log and notebook from

Monday, 9/30 /13 - . good morning! please remember to get your folder. take out everything from your folder and place it

Well Being and Leadership Academic Leadership Training Aug 20, 2013 - . to be happy……. what would the best possible

6 September 2013 - . please do now: which of the physical regions of the united states would you want to live in and