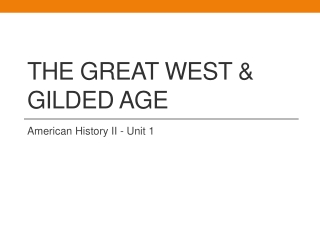 The Great West & Gilded Age. American History II - Unit 1. Review. How was Social Darwinism reflected in the wealth gap between the rich and the poor? “survival of the fittest” – rich believed the poor were poor because they were not as fit to survive and prosper The Great West and The Agricultural Revolution 1865-1896 - The clash of cultures on the plains . after the civil war, the

The Gilded Age - . pages 518-543. paupers and millionaires. a period spanning from the end of reconstruction to the turn

Political Corruption During the the Gilded Age - . ram block: create a political poster that is satirical in nature. this

Gilded Age Capitalism - . causes and consequences of corporate supremacy. how did corporations gain control of the

POLITICS OF THE GILDED AGE - . populist movement . farming dominated the lives of most americans in the south and west

The Gilded Age (1876 – 1900) - . period of great industrial growth and expansion of the economy. resulted in many very

Gilded Age - . business and politics. &quot;what is the chief end of man?--to get rich. in what way?--dishonestly if