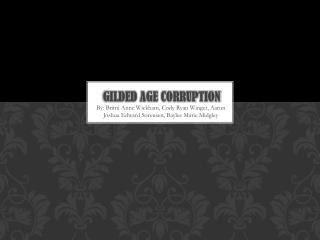 Gilded age corruption . By: Britni Anne Wickham, Cody Ryan Winget, Aaron Joshua Edward Sorensen, Baylee Marie Midgley. IN the beginning…. Gilded- it looks good on the top, but in reality its tainted. Having pleasing or showy appearance that conceals something of little worth. .

The Gilded Age and the Progressive Movement - . the big idea from the late 1800s through the early 1900s, the progressive

The Era of Reform and the Gilded Age - . standard and learning target. history 4.2.1: i can understand how movements

Gilded Age Politics - . chapter 23. essential question?. in what ways did the politics of the gilded era reflect the

Politics in the Gilded Age - . “i know now that all that glitters is not gold... however, i still go underrating men of

Politics and Corruption in the Gilded Age - . the term “gilded age”. “ the gilded age ,” was a term coined by the

Gilded Age and Progressive MS - . the compromise of 1877. in the presidential election of 1876, the republican candidate

Exodus from Kosovo - Thousands of kosovo citizens flee poverty, unemployment and corruption for the