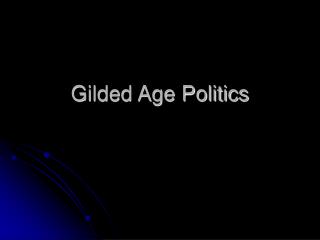 Corruption and Politics in the Gilded Age - . the politicians of the gilded age. compared to abraham lincoln presidents

Gilded Age Immigration and Politics - . mon nov 22, 2010 us history paulson. spark # 5. when was the last time you needed

Gilded Age Political Cartoons - . what a funny little government. bosses of the senate. who stole the people’s money?.

Gilded Age Politics - . chapter 23. essential question?. in what ways did the politics of the gilded era reflect the

Politics in the Gilded Age - . “i know now that all that glitters is not gold... however, i still go underrating men of

The Emergence of the Political Machine &amp; Politics of the Gilded Age - . chapter 15 sections 1 &amp; 2. i