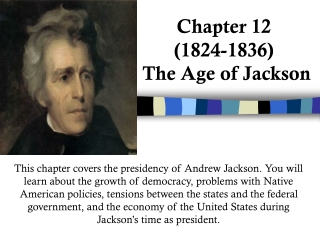 The Age of Jackson - . andrew jackson’s policies speak for the common people, but violate the rights of native

The Age of Jackson - . jacksonian democracy. the age of the common man universal white male suffrage (no property

Andrew Jackson - . the election of 1824. the west was represented by henry clay(ky) and andrew jackson(tn). new england