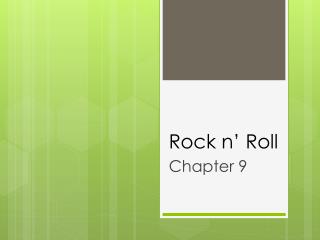 Rock and Roll: - Musical elements what is music? the art of sound in time sounds and silences arranged in temporal

Rock n Roll - . who made this music? who listened to it?. teenagers were the biggest fans of rock n roll adults didn’t

Rock and Roll: The Beginning - . what was the first rock and roll record?. qualifications: -heavy backbeat -even

It wasn’t ALL Rock n Roll - . proficiency #1. #2. historians believe that thousands of tvs were purchased during the

Rocking the british stage in the last century - . rock music, also known as &quot;rock and roll&quot;, is a style

The Woman Who Invented Rock ’n’ Roll - . “when chuck berry came out, i had seen all that” gospel singer geraldine

Rock and Roll High School - . music for the real world!. a bit about us. we were founded in 1999 as a school for