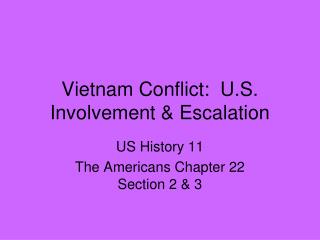 Moving Toward Conflict - . mr. white’s us history 2. main ideas and objectives. main idea – to stop the spread of

Chapter 29 The Vietnam War Era - . “how did the united states confront communism in east asia after the korean

Vietnam - . small group activity – vietnam csi. what to expect during this unit listen to a few tracks enjoyed by the

Vietnam is a country not a war - . vietnam. exit pass : write your answer in the summary box at the bottom of the